Who Left THAT There?

In my walks around our farm, I come across plenty of small mysteries —

Mystery #1: What snake left its skin in this hay bale? 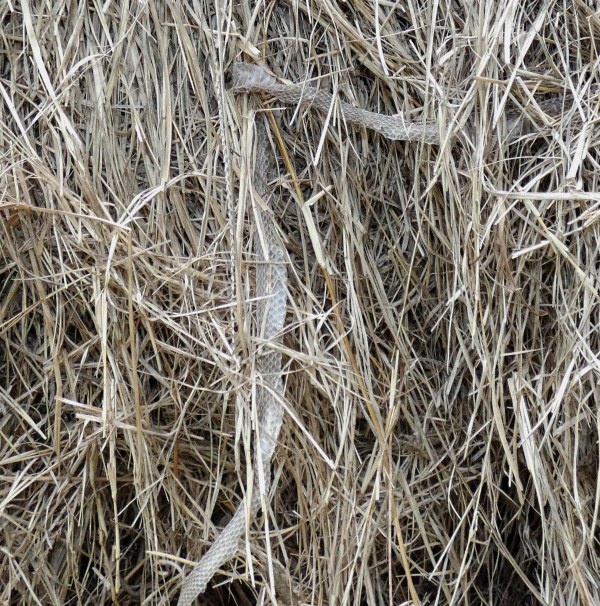 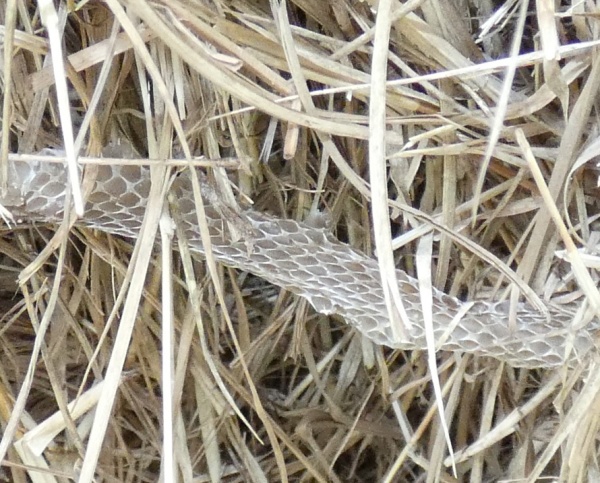 Mystery #2: Who scattered these pond mussels on the dock?  It seems like if it had been a raccoon or a fox, they would have left the shells right on the shore line, not carried all of them out to the dock. 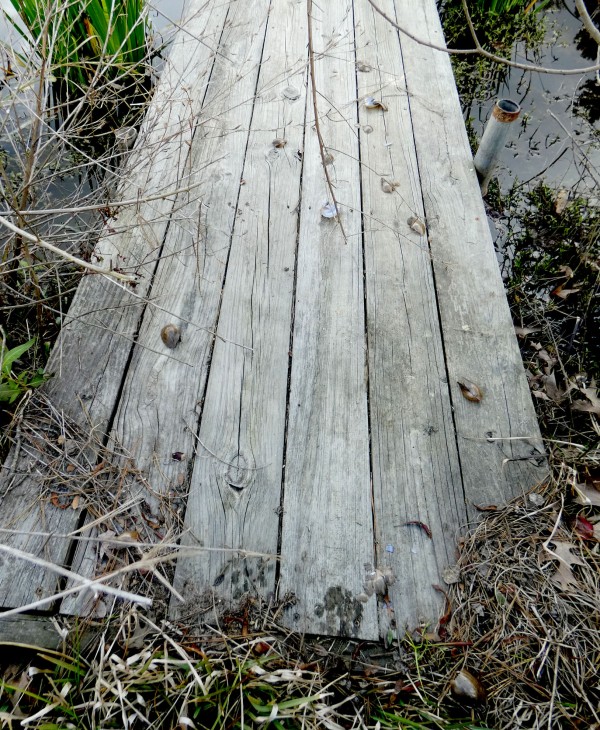 Shells on the little dock. 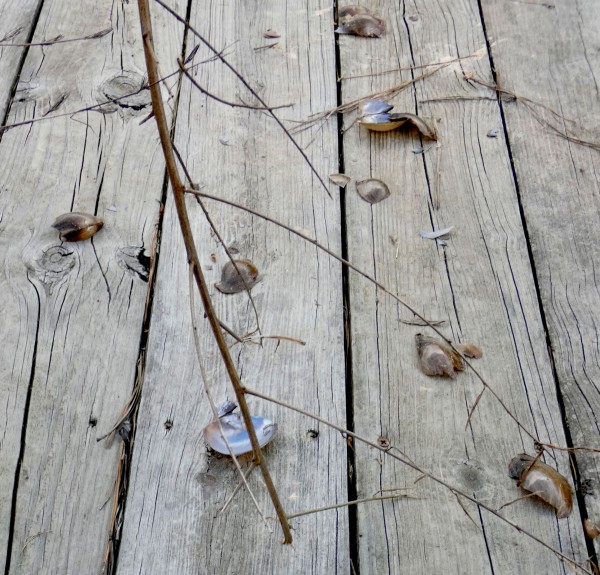 Zooming in on the mussel mayhem. 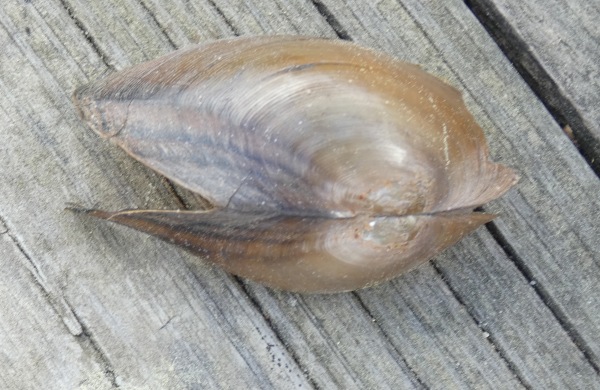 Mystery #2A: What kind of mussels are these anyway?  How many are in our pond?  What do they do?

Shortly after I found the scattered shells, my husband was working in the pond and found two live mussels.  He brought them up so I could take pictures, and then of course we returned them to where he found them. 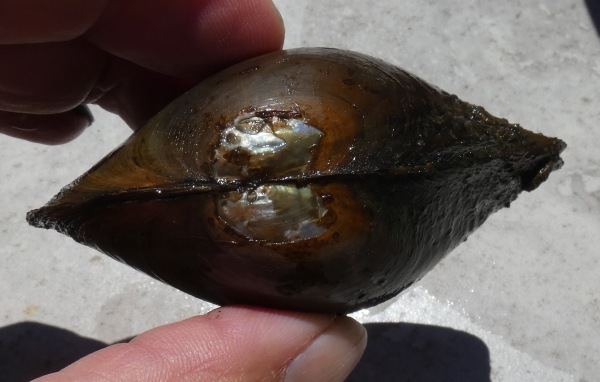 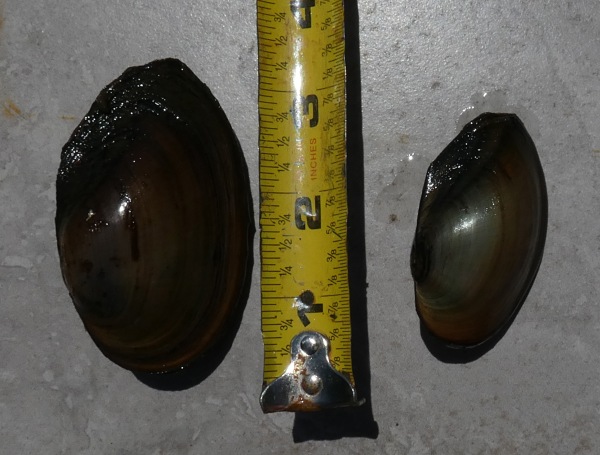 Based on their size and other features, I believe these are Pond Papershell mussels.

Mussels have an amazing life history — larvae are released into the water from the parent mussel and must find a specific host fish to hook onto.  The fish hosts them for weeks or months while they mature, then they eventually drop back into the pond floor.  They eat by filtering algae from the pond water.  These pond mussels can live for five years!

And sometimes I find a big, time-consuming mystery — Mystery #3:

A few days ago, I spotted some large feathers scattered under a big pine tree.  The longer I looked, the more I saw.  I might have thought “Was this bird molting?” but then I spotted a clump of feathers still attached to a bone!  Then I found more bone fragments. 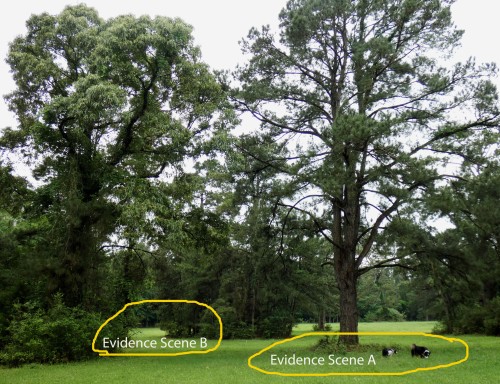 Two areas where feathers were found.

One of the feathers. 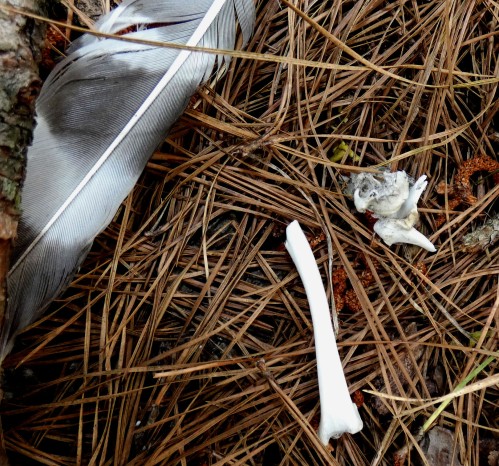 At this point, I didn’t know whether the feathers belonged to a hawk or to an owl, but I knew they were from a large bird.  I walked on, and about 45 yards further, I saw a lot more feathers under another old pine.  Then continuing into the woods about 100 yards, I found even more feathers under a third large pine, one where I have often seen a Great Horned Owl perch.

I was thinking, “What are the chances that I would stumble upon so many different bunches of feathers!”  I didn’t know if I was seeing evidence of multiple attacks, or of one attack with some spread-out snacking afterward.

When I got back to the house, I went online to search for feather identification, and to my delight, I learned that the US Fish and Wildlife Service has a feather atlas!  They have scans of feathers from 398 species.  By browsing the owl feathers and the hawk feathers, I quickly figured out that the ones I had found were hawk feathers.  (And this is probably a good place to mention the feather laws, which tell us that we are not allowed to keep feathers.  So mine are safely in the pasture and woods where I found them.)

The next day I went back out to look for more evidence.  I started with “Tree 1,” and I even found a clenched claw!  (I photographed it but I will spare you).

I went back to “Tree 2”, and I found another talon, this one much smaller than the first, and apparently, fresher.  Not too far from Tree 2, I found even more feathers around two fence posts. 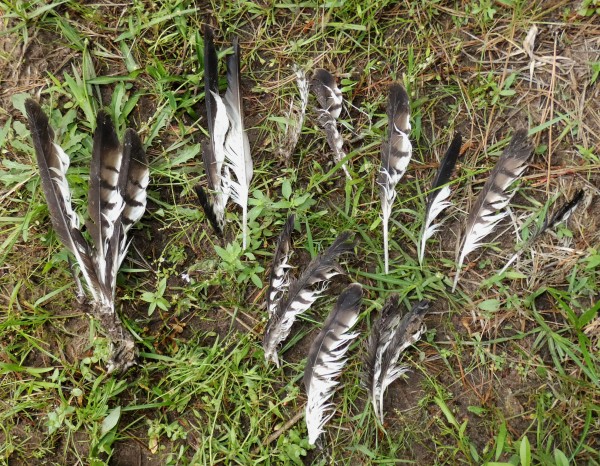 Feathers I found by the fence posts, loosely arranged by me, not the predator. 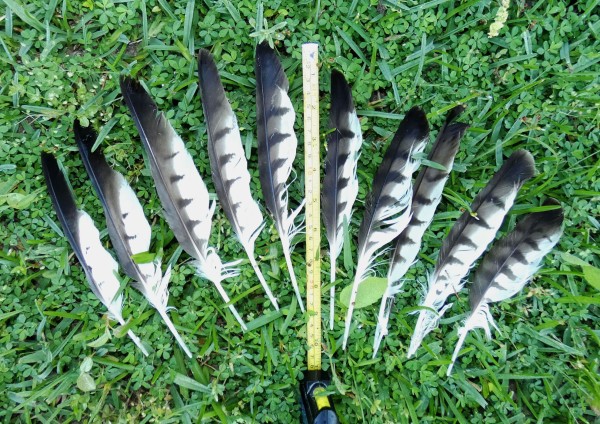 So, considering the dark edge as the leading edge of the wing, it seems like we have groups of feathers from two separate right wings here.  (I think they are both basically the same color, it was probably my camera settings that makes one look more brown and one more gray.)

I looked up the scans of our most common hawks — the feather shapes and patterns look very much like juvenile Red-tailed Hawks to me, but the longest feathers I found are about 23 centimeters, whereas Red-tailed Hawk feathers measure about 34 cm, so that leads me to think these are Broad-winged Hawk feathers. 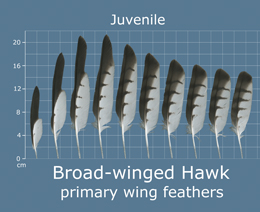 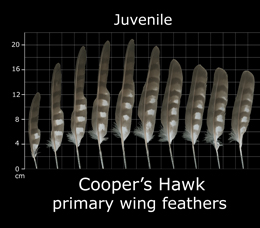 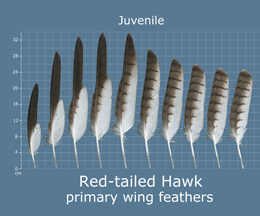 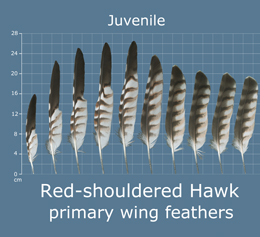 And I think the tail feathers match up well with the scans of Broad-winged Hawk feathers too. 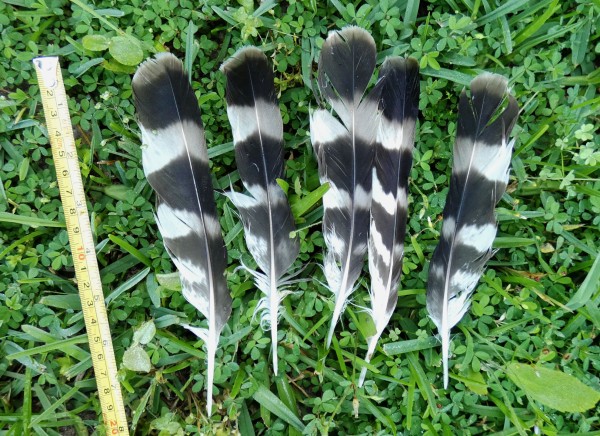 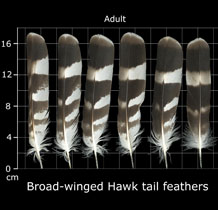 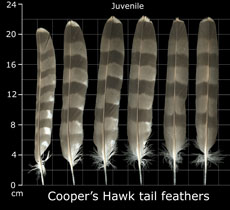 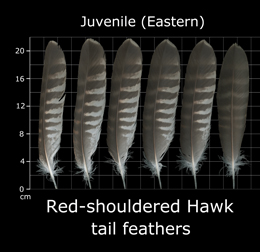 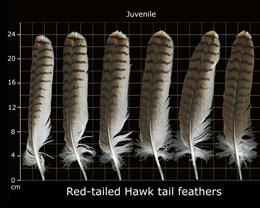 (And here are the Fish and Wildlife Service Terms of Use.)

I have occasionally seen what I thought was a Broad-winged Hawk here, but I was never really sure. 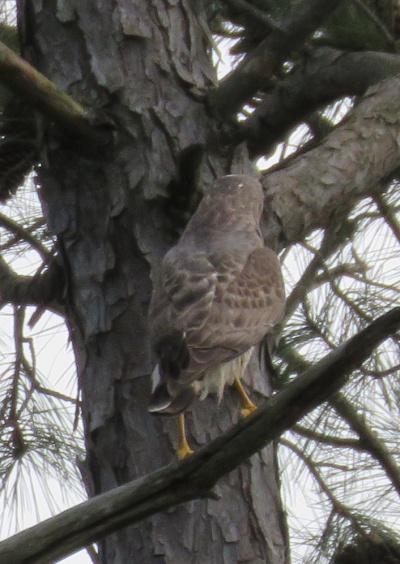 Hawk in the same pasture where I found the feathers. 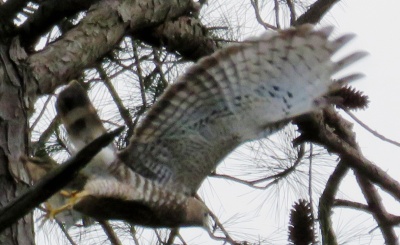 The broad bands on the tail indicate a Broad-winged Hawk. 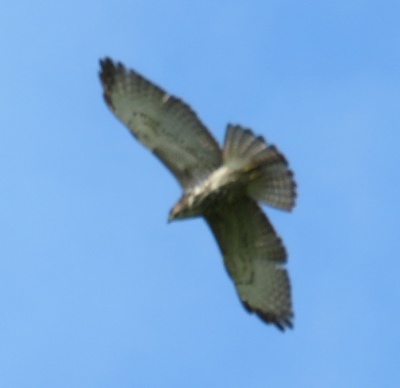 Blurry but you can see the markings and short tail.

This seems to settle that question, but the real mystery goes unsolved — who is preying on these hawks??

9 thoughts on “Who Left THAT There?”