On your next sojourn at the shore, skip the scandal sheets and salacious best sellers, and instead, scan this source about the specimens surrounding you — Spirals in Time: The Secret Life and Curious Afterlife of Seashells, by Helen Scales.

Before reading this book, about the only thing I knew about seashells was the tongue twister that affected the opening sentence of this post.  And also, that most shells are “right-handed,” opening to the right; but our official state shell of Texas, the Lightning Whelk, Busycon sinistrum, is “left-handed.”  (I’m not sure if they chose this shell because it is easily recognizable, or to express Texans’ renowned contrary nature.) 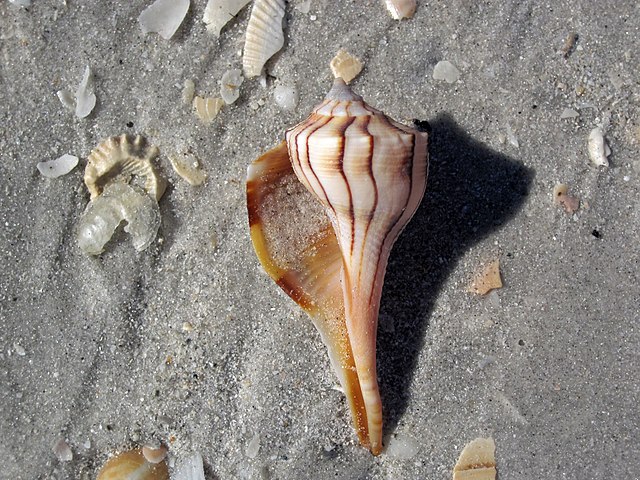 By James St. John [CC BY 2.0 (https://creativecommons.org/licenses/by/2.0)%5D, via Wikimedia Commons

But from reading this book, I learned how shells are much more than cute vacation souvenirs to set on the porch.  They are intertwined with many human undertakings: 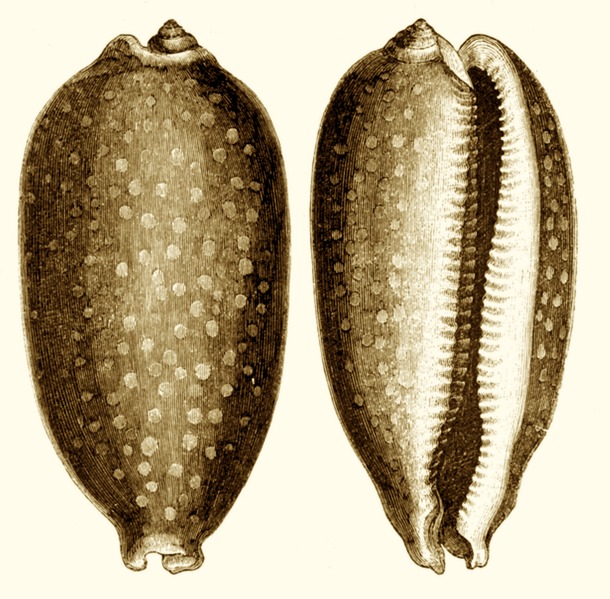 One of the most interesting topics was the complex poisons that cone snails produce.  The Geography Cone Snail, seen in the center of the illustration below, has been known to cause instant death in people who picked it up, not knowing it was different than any other shell.  This summary of cone snail toxins has to be one of the most succinct and memorable descriptions in all of science writing:

In order to match the potency of cone snail poisons, and the intricate ways they affect living bodies, you would need to assemble a horde of other dangerous species.  Not only would you need to lick the skin of a poison arrow frog (batrachotoxin) but also take a bite of liver from a pufferfish (tetrodotoxin), become infected by a colony of Colostridium bacteria (botulin) and to finish it off you would need to get bitten by a cobra (cobratoxin).  (from Chapter Nine) 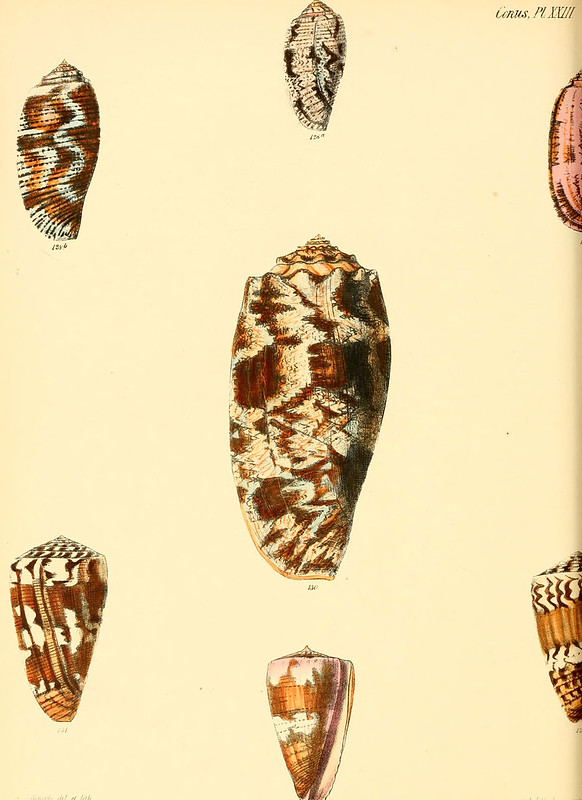 My favorite part was the story of Hugh Cuming, a sailmaker who in 1819 settled in Valparaiso, Chile.  He did well enough in business there that at the age of 35, he had enough money to build a small wooden ship, hire a captain, and take off to sail the Pacific for eight months, looking for shells.  He made two more exploratory trips in his lifetime.  He was self-educated on shells, and he decided he would not even try to catalog them, he would leave that to the experts.  He wanted to just gather a large and varied collection.  He sold and traded extras, and during his life he allowed many people to come in and study his shells.  At his death at age 74, he had a collection of over 80,000.  Many of them are now at the Museum of Natural History in London.

Normally, when new specimens arrive at the museum they are logged in with a reference number; but that didn’t happen with Cuming’s shells because there were simply too many of them.  Instead they were distributed, species by species, through the rest of the museum’s mollusc collection.  Only when someone takes out one of his shells, studies it, then writes and publishes something about it is it given a numbers.  There are still masses of unnumbered shells that haven’t yet made it into print. (from Chapter Eight)

Say!  He sailed the seas to see and sell sea shells!

And speaking of collecting shells, I learned that nowadays the shells you buy in a shop have not been washed up onto a beach and collected by someone strolling by — they are part of a large industry that harvests living animals and trades them around the world.  “…if you buy a shell on holiday in Hawaii or Florida, it most probably came from Mexico or Asia.”

Scales reminds us that even in personal collecting on a beach, there may be local regulations.  As I was linking to the page on Lightning Whelks, I saw that our Texas Parks and Wildlife Department has realized that people were harvesting those animals in numbers great enough to deplete live populations.  They have set several regulations to help preserve them.  For example, you have to have a fishing license to harvest any live univalves, and only two a day can be Lightning Whelks.

Overall, I really enjoyed reading this book.  Some sections were dense with information and required several readings.  If you are not that scientific-minded of a person, you might want to skip the first chapter as it goes into the descriptions of mollusc families and their evolutionary history, at least until you get interested to the point of wondering about those issues.  I think the other chapters can be read in any order.

For an introduction to some interesting molluscs, you might want to watch Helen Scales’ one-hour presentation, Under the Sea, on YouTube:

And it is Cephalopod Week!

← Beautiful Bee Balm
A Trip to a Research Station →