Fish for Dinner — or Not

It’s easy to overlook familiar birds, but yesterday I noticed a Great Blue Heron that was poised in an unusual stance, with its head low to the water for a long period of time.  On taking a closer look, I saw that it had some prey that was too big for it to handle.  I grabbed my camera and snuck closer and closer, but the bird seemed so intent on its prey that it was oblivious to me. 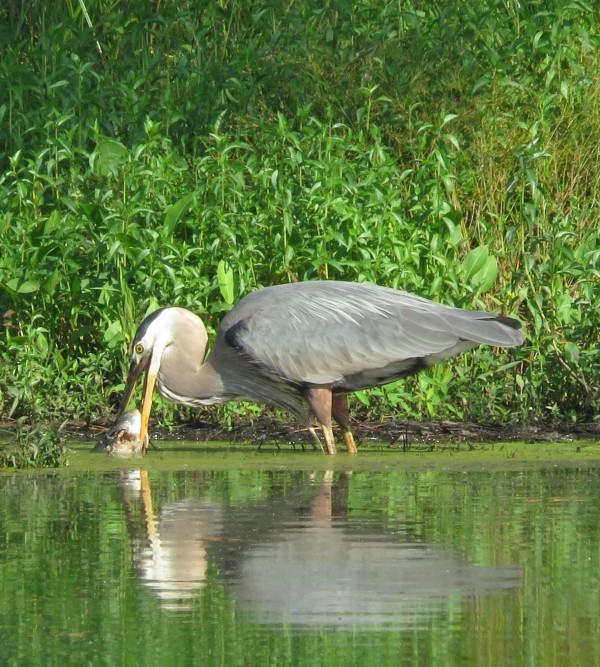 A Great Blue Heron tries to nab something out of the water.

At first I thought it might have a big bullfrog, but then I realized it had a fish.  The struggle went on, with the bird lifting the fish out of the water over and over, but never managing to gulp it down. 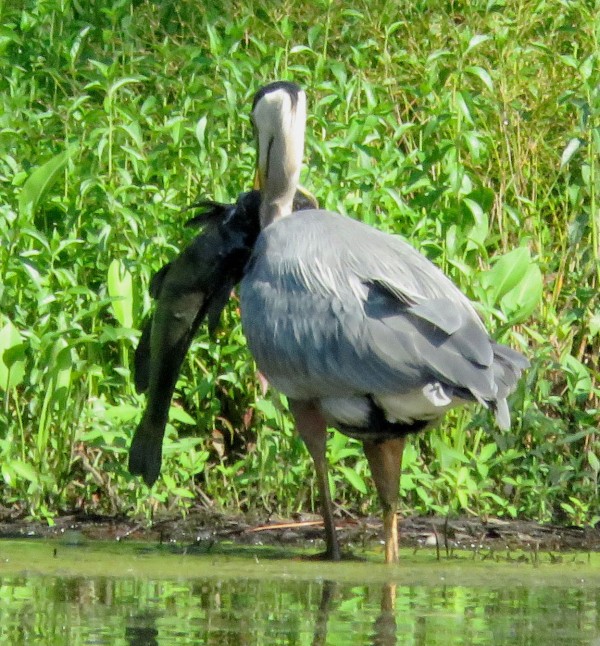 This picture shows how big the fish was.

The fish looked way too huge for the heron to manage.  Every now and then the bird would stand still as if debating if it should keep trying, and once it just ruffled all its feathers.

After half an hour, the heron gave up and flew off.  I ran around the pond to see the fish, and it was a catfish!

So that is one observation verified.  About a year and a half ago, I was out at night waiting for the super moon, and I saw some fish sleeping close to shore.  Our pond is manmade and it should only have blue gill and large mouth bass in it, but these fish sure looked like catfish to me and to everyone I showed the pictures to.  Some people say that birds bring in fish eggs on their legs and feathers, but supposedly scientists aren’t positive about that.

The catfish caught by the heron.

Here is info on catfish comparisons, from our beloved Texas Parks and Wildlife (TPWD).  If you click on the individual fish names, you will get more details.  The drawings are not so great, so here is a site with better graphics on how to tell a channel cat from a blue cat.  (A few seconds after the website opens, a big banner will try to get you to subscribe, but just hit the down arrow and you will be able to read the article.  Some of it is exactly the same as that from TPWD, but there is additional info.)

Back in March, I saw a similar match-up between a Great Blue and a fish.  The fish looked just as big as this one, and the Great Blue carried it way up on the bank.  The fish escaped a couple of times, but in the end, the Great Blue got its dinner. 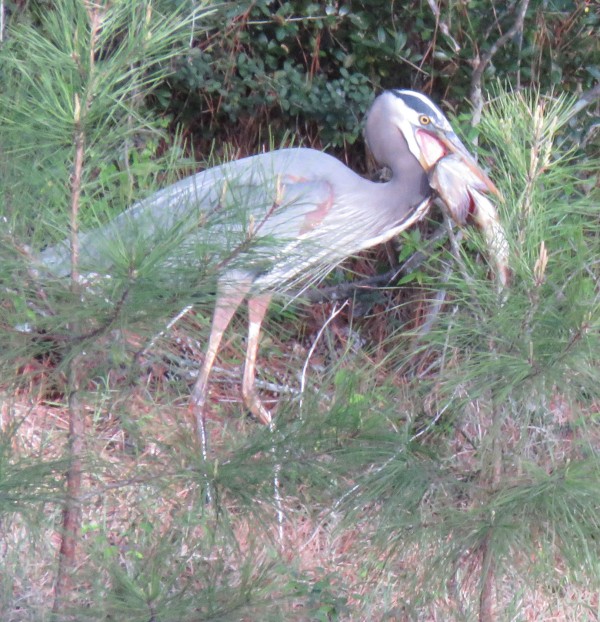 9 thoughts on “Fish for Dinner — or Not”