Usually these posts highlight the birds and insects I see on my daily walks, but I don’t want to neglect the underwater creatures!  I made a little net out of an old embroidery hoop and some netting, and left it in the shallow water at pond’s edge for a few hours.  Here are a few of the creatures I found: 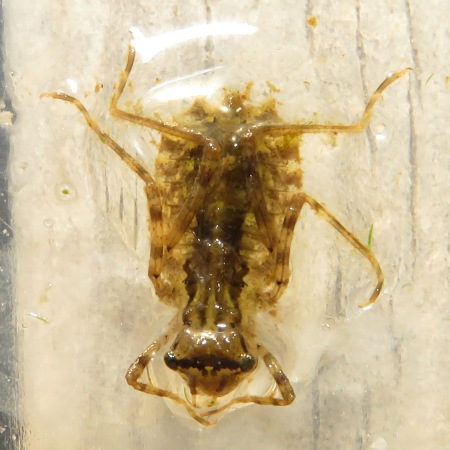 Freshwater shrimp and another nymph. The shrimp was about 1 inch (25 mm) long, and the nymph was only about 1/4 inch long (6 mm).

Then I saw another larger nymph swimming along the surface of the pond:

One thing I have learned from my dragonfly field guide, is that the different species of dragonfly look different even in the nymph stage!  (I don’t know why this surprises me, I wouldn’t expect all caterpillars to look the same.)  But I can feel sure it is a dragonfly, because even in their underwater life stages, the various kinds of larvae and nymphs have recognizable general shapes and features.  For example, dragonfly nymphs are robust, and don’t have tails; damselfly nymphs have three leaf-like tails that are really their gills!  Here is a page that simplifies their features.

Now so far we’ve looked at ones you can see with your naked eye, but see in more detail with the zoom on the camera.  Back when I was a fifth-grade teacher and spring fever was getting to the kids, I would pull out the microscopes and let the kids explore the even smaller creatures we could find in puddle water.  We were so fortunate as to have one microscope that connected to our computer and overhead TV, so we would put a little drop of puddle water on that one and let the volvox and stentor (stentors?) float peacefully in the screen while we worked on math and history.  I wish I had known then about Nikon’s Microscopy U and their Small World photo competitions.   Now, I love to look at these images both to learn something about science and to get artistic inspiration.

Some of their images of tiny water creatures: