While I was researching the Nursery Web Spider, I came across information on the Bowl-and-Doily Spider, a name which is sure to catch the attention of a textile aficionado such as myself!  From the guidebook description, I realized that I had seen these webs out in the woods, so I went looking for them.

Biology: This is a very small spider, conspicuous only for its distinctive web, which suggests a wispy bowl hovering above a silken saucer or doily.  Webs are spun in trees and are often seen at chest height along hiking trails…

Distribution:  From coast to coast within the United States.

Remarks:  Length 4 mm.  The tiny spider is easily overlooked in the large web, which often collects debris more conspicuous than the animal itself.

– from Insects of the Texas Lost Pines, by Stephen Welton Taber and Scott B. Fleenor, 2003, Texas A & M University Press

Yes, I actually have a whole book on insects of just the Texas Lost Pines, which is a small district between Houston and Austin.  There is no guidebook I won’t buy if I get a chance.

A barely-there web, that looks more Doily-above-Bowl to me. 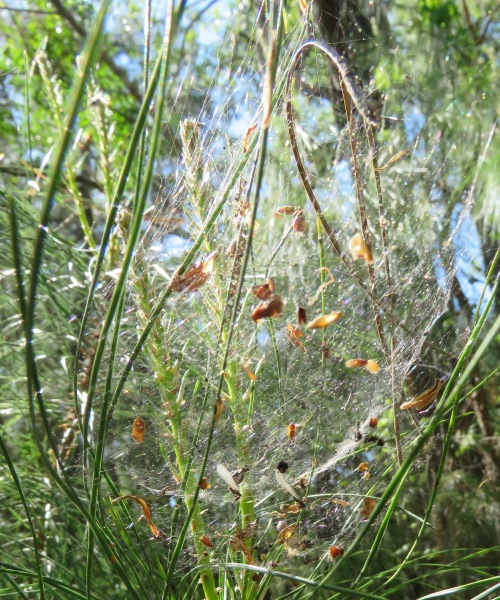 The bowl with detritus more visible than spider. 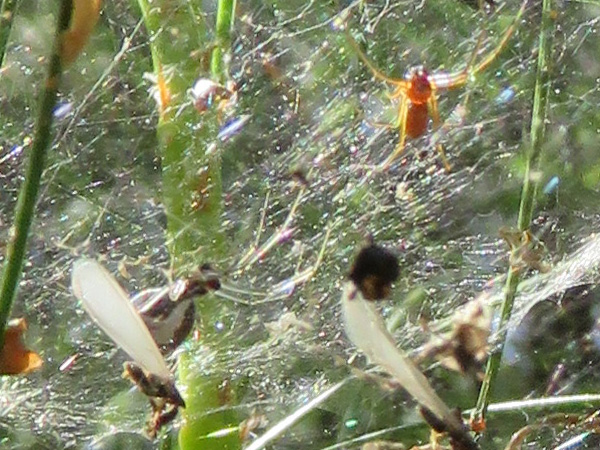 The black and white spider is definitely a Bowl-and-Doily. I am not sure if the thin reddish spider is a male, or an entirely different species.

A 1985 research paper says that unlike most male spiders who do not eat during adulthood, the males of this species live on the webs that the females create, and then eat the food that is trapped, even though the females try to prevent them from doing so.  The webs that I saw had plenty of bugs to go round. 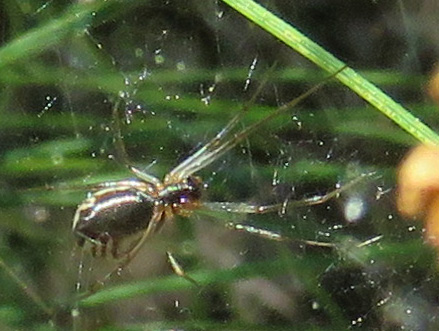 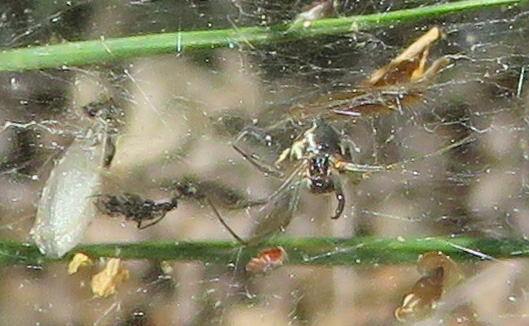 The spider among some of the insects and plant material trapped in her web.

It occurs to me that, as I try to find and identify all the species on our farm,  this little spider has done some of the work for me, by trapping insects I would not be able to on my own.  I will be keeping an eye out for more of these wispy webs.

← The Joys of Out-dated Reference Books
A Target-Rich Environment →