The Joys of Out-dated Reference Books

The other day, I was walking in the woods and noticed this spider in the top of a young pine tree.  I couldn’t tell whether it had caught and eaten something, or it had just molted.

Spider and … what? Previous skin? Dinner?

As I later found out, this is a Nursery Web Spider, Pisaurina mira.

The spider slowly moved away from the skin.

After a few minutes, I moved the empty shell to a better background, and it did look like a molted exoskeleton.

Now I know very little about spiders, and my only spider identification book is a 1961 Dover reprint of a 1902 James Emerton book.  It has small black and white illustrations, and in many cases, the spider’s name has changed in the last century, so I can’t always find new information.

With this particular spider, I didn’t get any good pictures of its eye pattern or other anatomical details that would help me identify it, so I just went through the whole book looking at the pictures for one that seemed to match.  I settled on Ocyale undata, but when I searched for that term, I didn’t find anything recent, just mentions in old books.  It looked like the name had changed to Micrommata undata, and that led me to an illustration from 1835, at the American Museum of Natural History.   The artist was Nicholas Marcellus Hentz, and there are 211 of his paintings in a collection there. (They are not available for use on a website, so you will just have to follow the link.)  I love naturalists’ drawings; they seem so much more related to the actual creature than a photograph does.

Hentz ended up putting all these illustrations into a book.  Plate 6 shows “my” spider as Figure 7: 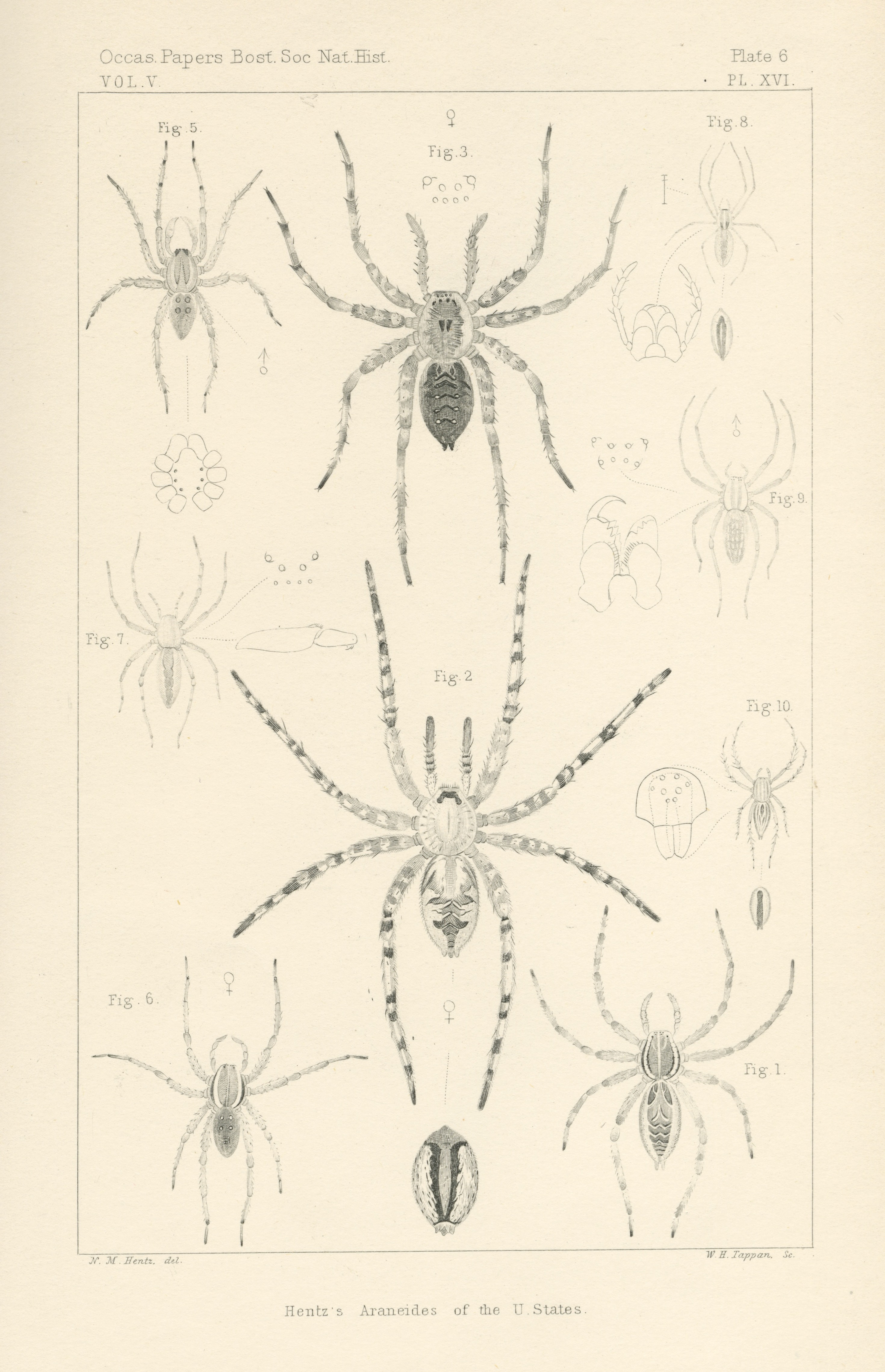 I loved the individual paintings of the spiders and wanted to know if this artist had recorded other animals as well; when I looked him up on Wikipedia, I found out that he is known as the first arachnologist in the United States.  He had come to the US as a young man, when his family was exiled from France in 1816, for having supported the French Revolution.  Hentz taught at many schools, but always seemed to have trouble getting along in the community, and always had to move and start new schools.

Then I saw an image of his wife, Caroline Lee Whiting Hentz, with information that she was a pro-slavery author in the 1850s, and I was thinking, wait — an easily-offended scientist that retreats from society and causes his wife to turn to writing potboilers — I know this story!  I had come across it in the book A Jury of Her Peers: American Women Writers from Anne Bradstreet to Annie Proulx by Elaine Showalter.  “By 1850, Nicholas Hentz had become a withdrawn invalid, and Caroline took over as the family breadwinner.” (p. 100)  From New England, Caroline’s family had never owned slaves; yet she wrote a novel in opposition to Uncle Tom’s Cabin, titled The Planter’s Northern Bride.  She defended the status quo when it came to slavery, but was an advocate of independence for girls and women.  She wrote novels about girls running away to live with the Indians, refusing to knit or sew, and writing novels in secret.  Some of her enticing titles are The Victim of Excitement, The Bosom Serpent, and Wild Jack, or The Stolen Child.  There is more information about her life and career here. (And before I knew any of this, I read and wrote a post about one of her books, Helen and Arthur, or Miss Thusa’s Spinning Wheel!)

Alright, so that is plenty of information about the arachnologist and his wife — let’s get back to this spider.

It took more hunting, but I finally found out that currently this spider goes by the name Nursery Web Spider, Pisaurina mira.  It is related to wolf spiders and water spiders.  According to the Emerton book, the female carries a flat egg sac in her mandibles, and when the young are about to hatch, she builds a nest in a bush, and they all live there together for a while.  (Emerton never uses the term Nursery Web.)

I went looking for the spider again today, to see if I could get better pictures, but it had moved on.

Someday I will probably buy a more up-to-date spider identification guide, but today I enjoyed following sidetracks from an old book to even older ones!

5 thoughts on “The Joys of Out-dated Reference Books”