You may have seen something in the news about the week of freezing temperatures we had here in Texas, and if you live in a temperate zone, you may be saying, “Can’t they even take one little week of cold weather? What wimps!” And you will get no argument from me. For me, all it took was one day of trying to open gate latches and dip chicken feed while wearing mittens, to fill me with appreciation for any of you that deal with that misery regularly.

Apparently the local birds shared my dismay at the cold, because they acted very unusual. After a night of snow, the first full day of the cold snap had clear skies. I went up to the barn to feed my sheep, and I was amazed at the numbers of birds weighing down the trees. I expected them to fly off as I approached, but they didn’t. They were busy stripping a huge yaupon bush of every berry. Usually it looks like this all through the winter — 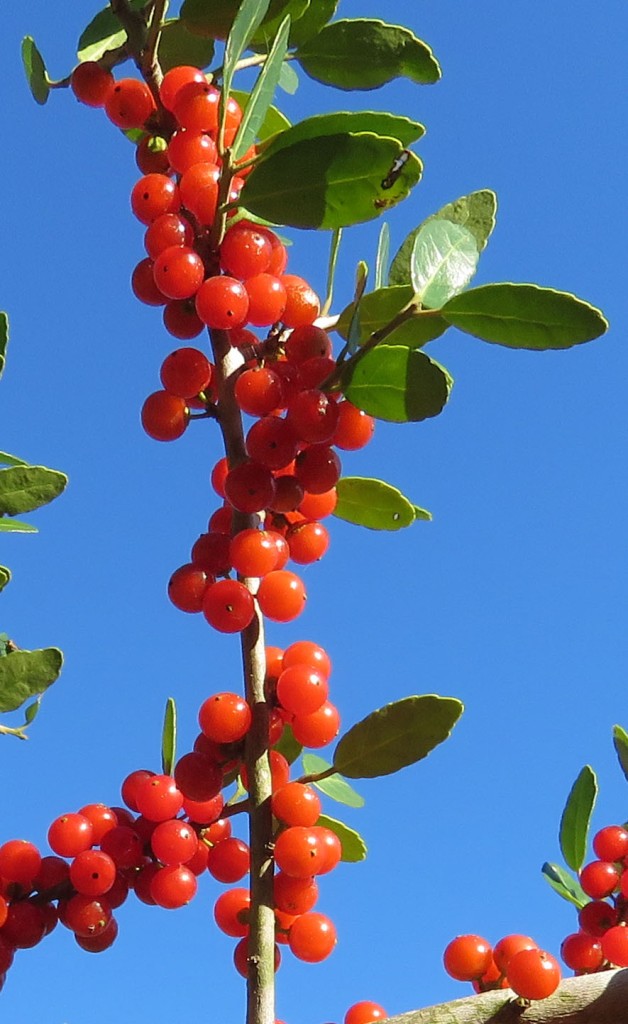 Yaupon Holly, Ilex vomitoria. Not edible for humans, but good food for birds!

but the birds had picked it clean. I was standing just feet from them, with my husband and our two dogs, and the birds never flew off. I have never been so close to so many wild birds (well, maybe sea gulls).  It looked like one of those Christmas cards that show all kinds of species decorating a Christmas tree in the wilderness.

Among the American Robins and Cedar Waxwings, I saw four Hermit Thrushes! In the 11 years we have lived here, I have only seen Hermit Thrushes peeking out of the brush about twice, and there were four right out in the open! And adorable little fluff balls they were. 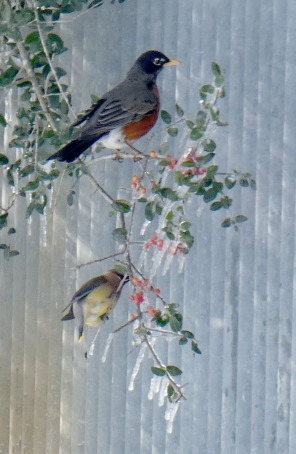 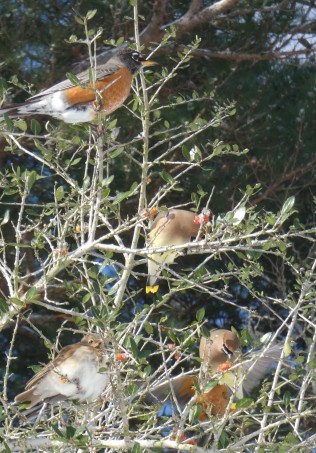 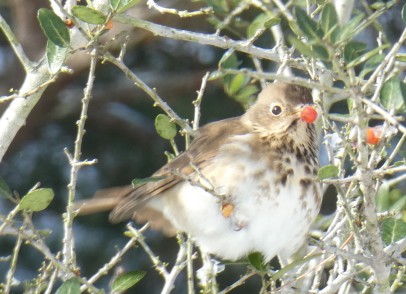 Fluffy Hermit Thrush with a berry.

Hermit Thrush in the snow.

Yellow-bellied Sapsucker on a tree.

Robins and Hermit Thrushes clearing off a yaupon bush.

Icy rain was predicted for the next few days, so I filled the bird feeders by the house. Then I took the screens off two windows so I’d be able to shoot photos through the window.  I turned my love seat to face outside, and for the next two days I sat there as much as possible, snuggled up and watching the birds.

Among the usual Chipping Sparrows, American Goldfinches, and Pine Siskins, I had some rare visitors (for us) — a Brown Thrasher, and a bunch of Purple Finches. I have seen a Brown Thrasher here but never gotten a picture. We have House Finches sometimes but we have never had Purple Finches that I know of — it could be that they have been here before, but as I rarely sit and watch the feeder, maybe I have just missed them all this time.

I had a lot of trouble distinguishing them from House Finches.  Guidebooks say things like “white belly, forked tail,” but the birds don’t pose to show off their best features.  Between the gray days and shooting through glass, I didn’t get stunningly clear pictures.  One thing that helped was using the tool “Enhance/Auto Smart Tone” in Photoshop Elements — one option would show super contrast and color, and that would match the pictures in the guidebooks pretty well.  And out of all my guidebooks, I found the most helpful description details in the Smithsonian Handbook, Birds of Texas. 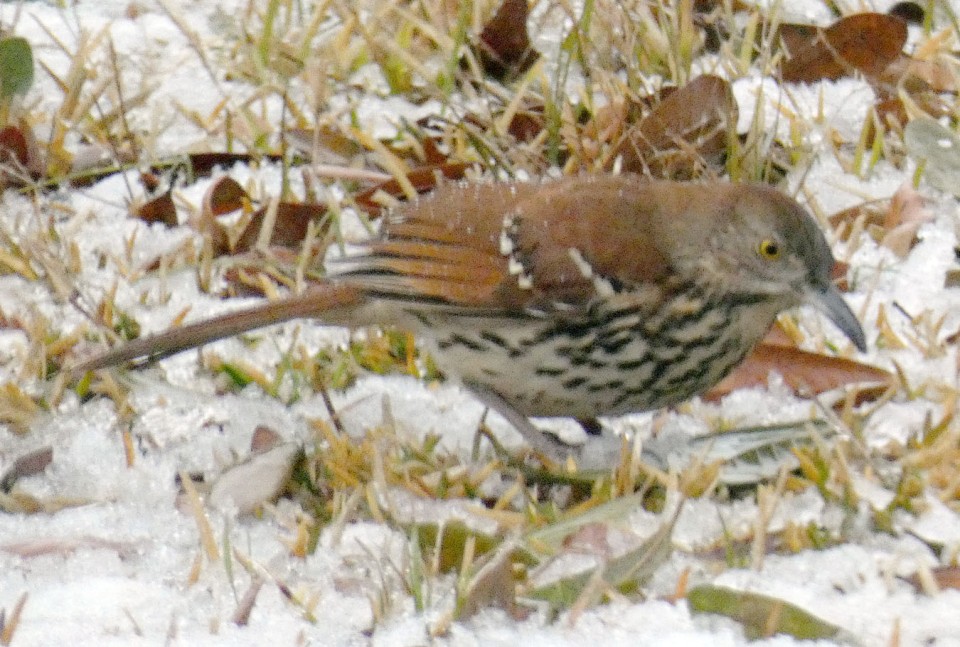 Brown Thrasher on the ground.

This Photoshop-enhanced picture exaggerates the birds’ features, making it easier to match them to guidebook photos.

I was surprised that wrens, chickadees, and titmice never showed up at the feeders, since they are usually in evidence.  I was also surprised at how often larger birds like Mockingbirds and Blue Jays would drive off the flocks of little birds.

We were exceptionally lucky during this cold spell — unlike so many others, we only lost power sporadically over one 24-hour period.  I am glad I got to sit tight during these icy days and get a glimpse into the birds’ world.

5 thoughts on “Texas Cold Snap Brings Out the Birds”