The Time My Husband Was Right

As a long-married couple, there have been a few occasions where my husband and I suddenly realize we remember “facts” differently, and have to do a little research to settle the matter.  After a little more discussion and a friendly wager (say, for the inclusion/exclusion of raisins in baked goods), I usually run into the house to check some of my 237 guidebooks* for proof that I am right.

But on one of those occasions, I was wrong.

The innocent insect that started a discussion.

On seeing this insect, my husband referred to the praying mantis, and I scoffed and said it was a preying mantis.  (Since the two words sound identical, we had to accompany each with appropriate gestures – his was hands together, eyes skyward; and mine was hands like claws, gnashing teeth fiercely.)

I went in to research, and found out I was wrong.  Kind of.  A little bit.

These insects are referred to as “praying mantises” and not preying mantises, but in a generic sort of way, as actually there are many species.  Neither of us knew that.

Many of the mantises in the US are introduced species, from Europe or China.  Kaufman Field Guide to Insects of North America says about the Chinese Mantis, “It is still deliberately introduced to many areas as a biological control agent.  Its efficiency is questionable, as it is an indiscriminate hunter, taking beneficial insects as well as pests.”

The ones we see here are native species, Carolina Mantis (Stagmomantis carolina).

The other day I found this female about a meter off the ground on a bent pine tree.  She began to move back and forth just a little, like a leaf shaking in the wind.  (I had just read about this behavior on a blog, but I’m not sure which one.  I think on Victor Rakmil Photography, but now I can’t find it there.)  I was assuming this was to disguise herself as a leaf, but I have also read on Wikipedia that the movement might be a way to see better, to distinguish foreground from background.

The females’ wings are too short to allow them to fly, so they sit and wait for prey to happen by, and they also give chase.

A few years ago, I came across a female making her egg case on a lawn chair.  I thought the braided pattern was beautiful, and now I am wishing I had paid more attention to her actual motions.

I didn’t think a canvas chair in the middle of the yard was a good location, so the next day, I took it into the house and kept it in a jar until the babies hatched.  I released them outside, but kept the egg case. 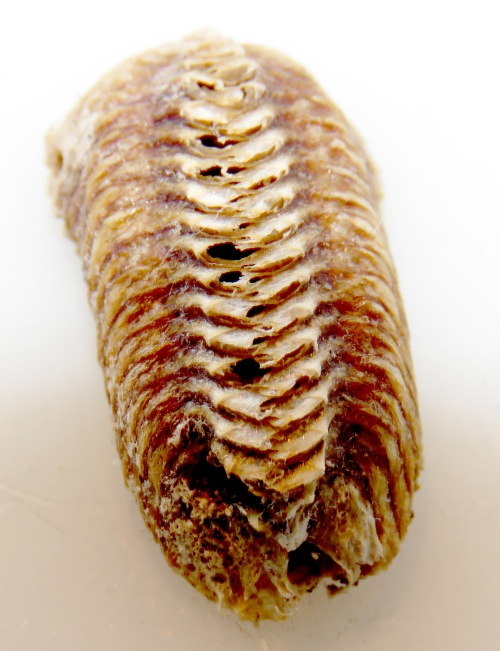 The underside of the egg case.

I believe the holes in the side and on the top are where the young mantises emerged.

The males have long wings, and are sometimes attracted to lights at night,  so sometimes we get one in the house.

On this male, you can see the three eyespots that are between the compound eyes.

I tried upping the contrast on this picture of the female’s head, but if she has those simple eyespots, I can’t see them.  But I also can’t find any information that says that females don’t have them, so maybe my picture just doesn’t show them.

So, every time I see a mantis turn its head and gaze at me, I know it is reminding me, “Your husband was right.  You owe him oatmeal cookies — with no raisins.”

*number of guidebooks estimated.  I sometimes think about counting them, but I end up sitting down and reading one.

← Host and Guest
It’s Like They Know It’s NaBloPoMo →

6 thoughts on “The Time My Husband Was Right”