I love to read books about homesteaders and their adventures.  One of my favorites, Ruffles on my Longjohns, was written by Isabel Edwards, about the life she and her husband led living far from any road in British Columbia.

The story picks up in 1932, when her husband Earle talked her into leaving Oregon for what was to be one winter at his brother’s homestead on Lonesome Lake, a tributary of the Bella Coola River.  Isabel had never spent time in the wilderness, and was afraid of snow, but agreed to go, and ended up loving their life in the woods. Her book was published in 1980, and at that time she was apparently still living on their homestead.

That first year, they were able to get from Vancouver to Williams Lake in their Studebaker (that is now Highway 97), and then turn back west to Charlotte Lake, where they had to leave their car at a ranch for the winter.  They had heard that someone at this ranch had a power boat and could take them and their supplies across the lake, where they would cache their supplies and then hike to their destination, Earle’s brother’s homestead.

But there was no one at the ranch, no boat, and no gasoline for them to be able to go back the way they came.  Earle decided that the only thing to do was build a raft and go across the lake on it.  Isabel details the building of the raft and then describes their voyage:

At the end of the second day all was ready.  We noticed that there was a light, off-shore breeze in the evening and thought we should take advantage of it so we quickly broke camp and carried everything to the raft.  Earle loaded the things securely aft of the mast which was about a third of the way back from the bow.  There must have been six hundred pounds of freight and our combined weight which added two hundred and fifty pounds more.

It was dark before we were finished but we made a bonfire at the edge of the water to give us light to see by.  Earle stood on the stern with the steering oar and I sat in the empty space in front of him.  My job was to manipulate the sail when directed by the skipper…

All went well for about half a mile when we noticed water lapping over the logs.  We were sinking!  It was not far to shore but before we could beach the raft, many of our belongings were wet, mostly the bedding.  Despite the huge fire we built to dry things out, I woke in the morning to find my pillow had frozen, leaving a thawed hole where my head had rested.  (pp. 20, 21)

Checking the raft the next day, they discovered that the logs were full of wormholes and had absorbed water.  Earle made repairs and they took off again!

The full sail billowed and the heavy raft began to move slowly at first, and then with accelerating speed.  Before we knew it we were in the middle of the lake, when suddenly a strong gust of wind caught us and the nose of the raft ploughed under.

No sailor ever leapt into the rigging faster than I climbed over the duffle piled around the mast.  I gathered the tarpaulin in my arms while Earle backed as far to the stern as he could.  In another moment we would have been standing on end in the widest part of Charlotte Lake.

I clung to the sail for dear life to keep the wind from filling it again and slowly the nose of the raft stopped its plunge, but it seemed to take forever before it started coming back to the surface.

Terrified, I was beyond reason and begged Earle to go to shore, which was probably the worst thing we could do for Charlotte Lake was about five miles wide where we were and the only shore we could go to was a wind-swept bay.  The waves caught us broadside as they broke on boulders the size of a kitchen stove and we were soon in danger of breaking up.

…It was impossible to use the sail and we had only one pole, so I was going to have to go ashore and tow the raft with a long rope attached to the bow while Earle kept it off the rocks with a pole.

It was hazardous getting from the bouncing raft onto the slippery rocks, but I made it, falling in once, just to the waist.  Then, leaping and sliding, I tugged on the towline and we began to move.  (pp. 21, 22)

I am filled with admiration for people who can take events like that in their stride.  I would be horrified just to face getting on a raft in the dark, much less jumping off one into a freezing cold bay with waves crashing on boulders.

There are lots of similar adventures in the book, but I also love the parts where she describes more of their daily life, and how they provided for themselves by growing and making the things they needed.  Earle even made her a spinning wheel, and she taught herself to spin, so that she would have yarn to knit into socks.

Here is one of her creations that I tried for myself, a “bug,” an emergency lantern made out of a tin can, a candle stub, and a loop of wire.  First you punch an X-shape into the side of the can.  (I made a hole by hammering a nail through the side, then widened it a little at a time with a screwdriver blade. It took me 15 minutes.  I am sure it took them about one.)  Then you push a candle stub up through the hole.  You make a loop of wire around the can and twist it to make a handle. 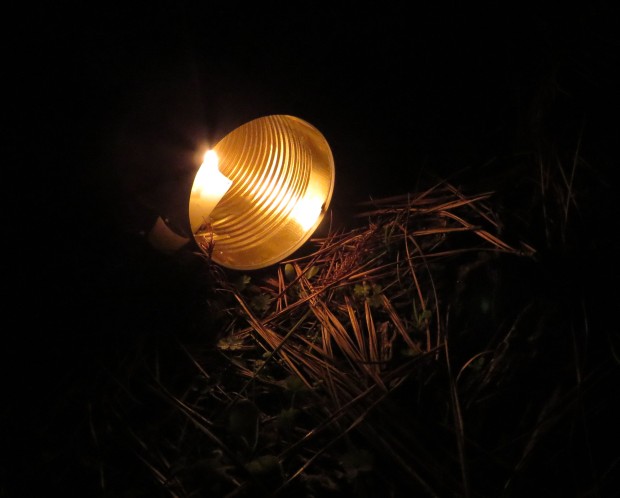 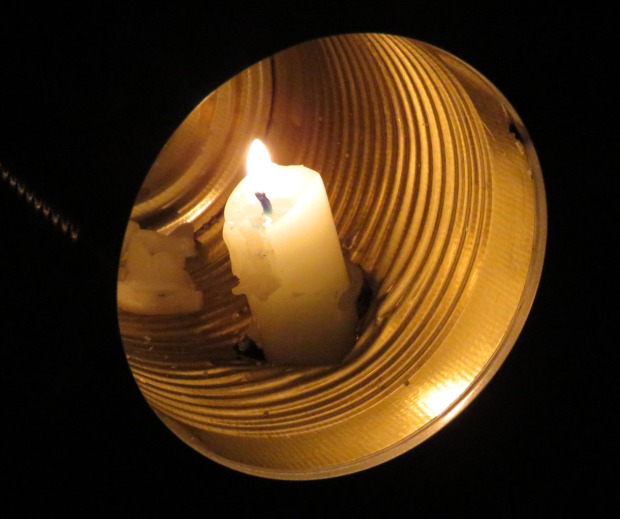 A “bug,” an emergency lantern as described by Isabel Edwards.

Isabel wrote that they used such a bug to help them see the last few miles of the trail to their house when they had to travel in the dark.  I tried it outside — it doesn’t cast much light, but the can protects the candle from blowing out and its shiny interior reflects what light there is.  I’m sure if I were trying to come up with something like this on my own, I would have tried to balance the candle stub inside the can, where it would have fallen over, or placed it on the bottom of the can, which would make it useless for trying to aim the light.

There are many reasons I would have given up and returned to civilization if I had been in Isabel Edwards’ place, but I am glad she succeeded and shared this engrossing account of their life in the wilderness.