Just outside of Las Vegas, Nevada is a National Conservation Area called Red Rock Canyon.  I had hoped to visit this place since I learned about it back in 2006.  At that time I was a seasonal park ranger at Big Bend National Park, and one of the full-time rangers was leaving to go to work at Red Rock.  She really liked geology so this park was a good fit for her.

This October we finally got to take a day trip out there.  It was a little odd to me, because in Texas our most dramatic canyons are in lightly populated areas, and you have to plan ahead for a trip, but there are nice suburban neighborhoods just a few miles from Red Rock.  We just rented a car in town, and stopped virtually at the edge of the park,at a big grocery store to get snacks and water.

It is possible to hike up into the peaks, or book horseback riding trips into the canyon, but we just did an overview by driving the 13-mile loop.  Being so close to neighborhoods, there were a lot of people in the park to train, biking or running that loop.  My mind was telling me “wilderness area” and then I would see a tiny little woman in hot pink running shorts and bunny knee socks running along the side of the road.

The variety of geologic formations is amazing.  From very informative (but faded) signage we learned that this area was once ocean floor, and then millions of years later it was all sand dunes.  Fault lines run through it, and their forces have turned, twisted, and scrambled the layers of rock from their original positions.  (A very good explanation is here.)  I didn’t take too many pictures because we were there in the middle of the day, when the light overhead washes out the contrast in the rocks. 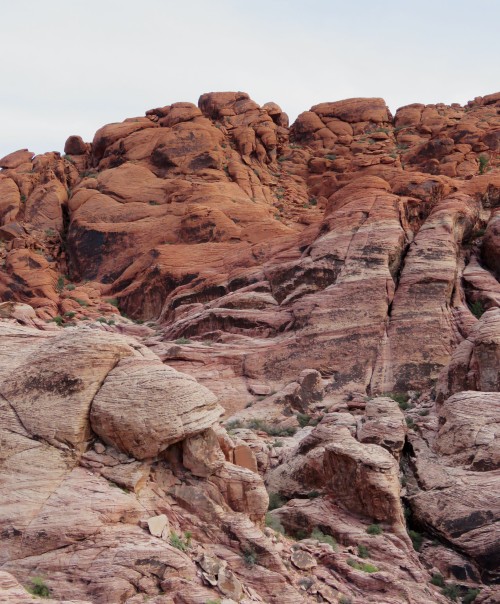 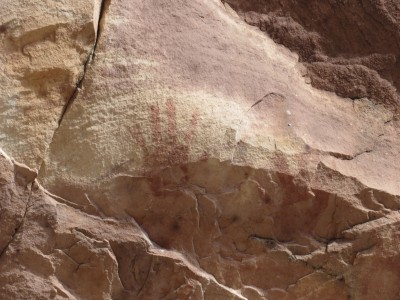 Photo edited for contrast to make the handprints show up.

As far as birding went, I only saw 12 individuals in 4 species, and all of them were species I see in Texas too.

When I got home and saw the list of possible birds, I was very sorry not to have tried harder, because many of those Western birds are ones I will never see in the places I usually travel.  There are also wild horses and burros at Red Rock but I didn’t see any of them either.  Next time I will try to get out there earlier in the day, and go further to some of the surrounding natural spots, but I enjoyed seeing the rock formations.  If you go to Vegas and need a break from the noise and crowds, I think you will find Red Rock Canyon worth the trip.