A few weeks ago, I was walking up to the lamb pen, and I realized that one of the tree stumps across the pasture just looked odd.  It looked too tall and too lumpy at the top.  I had my camera with me and took a few pictures.

This was the most I could zoom in. 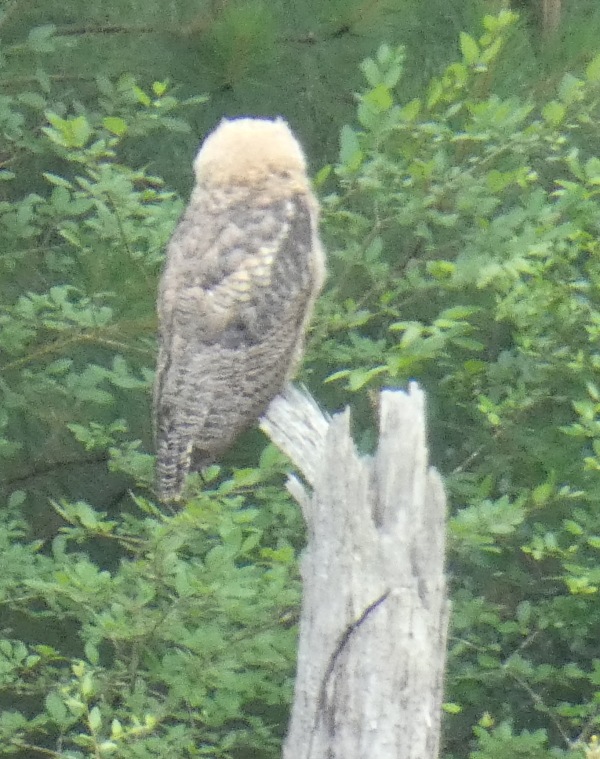 The owl’s back, showing its pale fuzzy head.

It was a Great Horned Owl, but its head was all fuzzy, with no ear tufts showing.

A few evenings later, I was outside trying to get pictures of the nighthawks zooming over the pond to catch bugs. I kept hearing this squawking from birds perched in the trees, and I was thinking, “I didn’t know nighthawks ever sounded like that — or is it a squirrel?  or a tree frog?” and when I tried to sneak up and get a look, two owls flew off in different directions.  So I got out the iBird app and played all the sounds of Great Horned Owls, and sure enough, the young ones squawk like that!

Since then, we have seen them several nights, usually with a parent close by, and we have heard them almost every night for three weeks.  I realize now that I have heard them in past years, but I never knew what was making that sound. 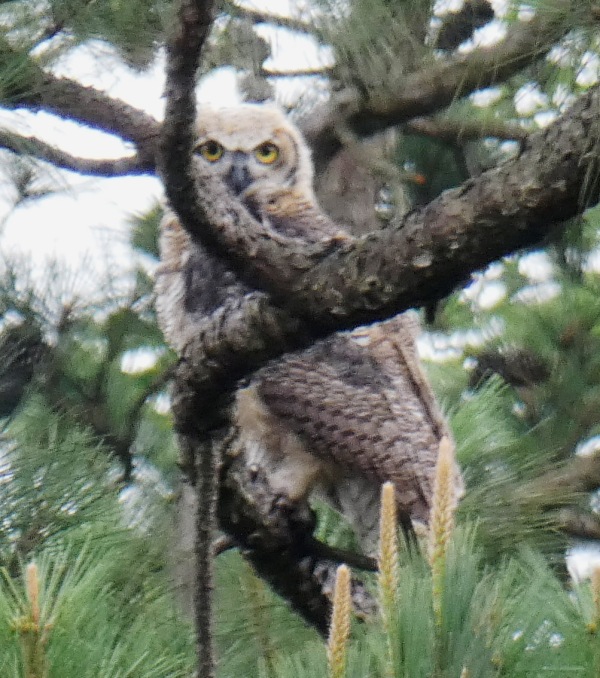 I was following the sound in the twilight, and I realized our old feeder just looked odd.  “It doesn’t have a post sticking up like that.”  And again, it was an owl. 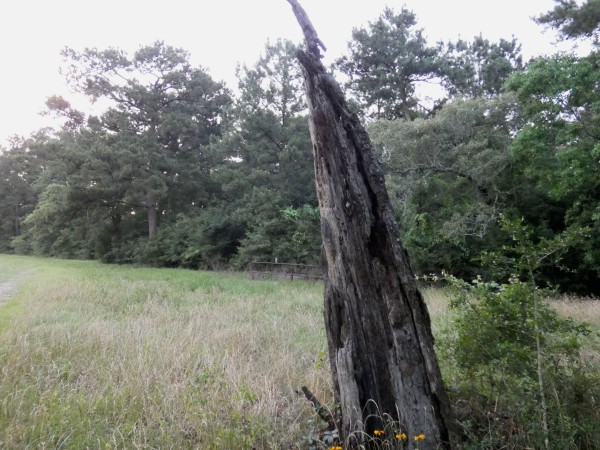 This is how far away I really was to take pictures. The tiny white blob in the middle of the picture is the owl.

Now to me, this owl on the feeder looks quite a bit older than the one on the stump — its ear tufts are showing, and its belly is fully barred.  But it doesn’t seem fully adult, either.  It seems to just sit there, waiting for someone to bring it some food.  And the squawk it makes sounds like the begging calls that are here on All About Birds.

Checking Life Histories of North American Birds of Prey, I see: “There is usually a very noticeable variation in size among the two or three owlets of a brood, due to the eggs being laid as much as two or three days apart. As incubation begins as soon as the first egg is deposited, the eggs may hatch several days apart.”

And also: “The period of incubation is about 28 days, the young remain in the nest about six or seven weeks, and are unable to fly until they are 10 or 12 weeks old; this means that if the eggs are laid about the first of March…it will be the middle or last of June before the young are able even partially to shift for themselves.  During all this time, and probably for some weeks longer, they must be fed wholly or partially by their parents.  They are exceedingly voracious feeders…and it is much easier for their parents to supply their needs before the summer foliage becomes too dense.”

I would guess that these birds are the ones who caught and consumed the Broad-winged Hawks whose feathers I found.  They may be hanging around here in hopes of catching my chickens, but I have enjoyed getting to see them so close up.

Note: Life Histories of North American Birds of Prey was originally published in 1938, with Dover Publications bringing it back in 1961.  Author Arthur Cleveland Bent studied birds himself, and also collected many observations from contributors around the country.  Reading it can be quite shocking, because of the way ornithologists and amateurs blithely robbed nests of eggs, captured birds to study, and then, if the birds did not tame down quickly, dispatched them.  But it does have the most detailed information I have found about how these species live.

← Who Left THAT There?
Finally Caught on Camera →