Some of the species around here are notoriously camera-shy.  Here are two snakes that I have glimpsed for years, but have never been able to get really good pictures of.  Thanks to my alert husband, I finally got pictures!

The first one was this beautiful Eastern Yellow-bellied Racer.  Back in May, my husband was digging in a flower bed and found it and followed it through the yard until I could get there with my camera.  He held it down gently for just a second with the shovel, so you can see some sand on its head in these pictures. 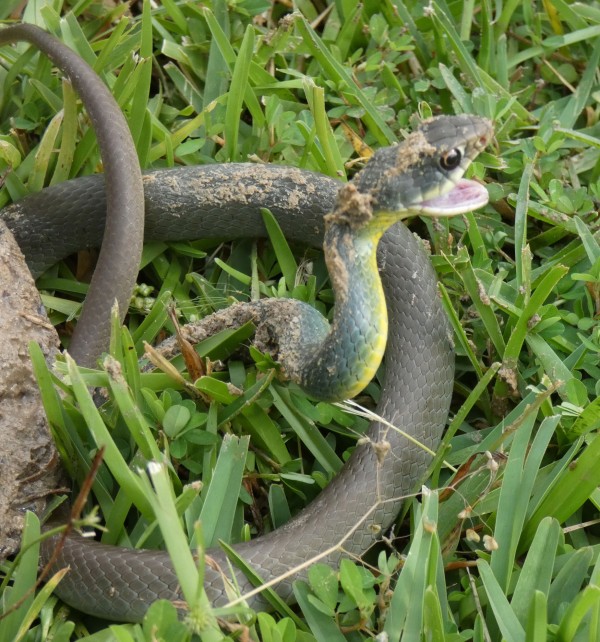 This snake was not very big; I would say about 20 inches long and maybe an inch in diameter.  It was so glossy and fresh looking — it made me think that this is who had left the shed skin I had found a few weeks earlier.

And a few days after this, I found another shed in the woods that looks to me to be from the same kind of snake.

Look for the long thin shed skin near the log.

I had found and photographed a juvenile of this species, back in January of 2011!  I am glad I finally got good pictures of an adult.

This next one has been very elusive over the years.  I have seen it swanning around on our sidewalk, and swimming in the pond, but I could never get a good shot.  A few weeks ago, my husband saw it going from the pond to beneath our deck.  We were both upstairs in the house — I got a look at it from the window, enough to see that it was relatively short and heavy-bodied (especially compared to the snakes I am most used to, the rat snakes that I see almost weekly, as seen below).

Another rat snake trying to get my chicken eggs. This mockingbird alerted me to its presence by jumping up and down on the chicken run roof.

I couldn’t tell for sure if it was a water snake (non-venomous) or a water moccasin (venomous), and by the time I got downstairs with my camera, it was gone.

Then this week, my husband saw it in the yard and called me.

At first I couldn’t even see it; then I really wasn’t sure what it was.

“I don’t see a snake anywhere.”

I could see vertical dark marks on its jaw area.

Then I saw the little vertical markings on its jaw, which our other water snakes have (I don’t know if all snakes in the Nerodia family have them, but the ones here do), but still, I ran for my snake ID books, just to be sure.

So here is something irritating — I only own two snake books, Texas Snakes by Alan Tennant, and National Audubon Society Field Guide to Reptiles and Amphibians, and the Tennant one doesn’t even have an index, and the Audubon one does not index all snakes together!  You have to look them up by family, or by individual species name.  So you look in the “snake” section, but things like “rattlesnake” and “copperhead” and “cottonmouth” are not anywhere to be found!  Pretty time-consuming when you are trying to figure out if you are looking at a venomous snake.  (Also, we call cottonmouths “water moccasins” and that is not even in the index at all.)

This pose was not helpful in getting a quick ID.

Finally, I saw a hint of its yellow belly.

Once I could sit at the computer and compare these photos to ones I had taken of real Cottonmouths, I could see the differences.  I will remember their characteristics next time I see them in the wild, but for me, it takes lots of reading and research time to get familiar with the different species.

Water Snake head looks much more rounded to me.

In Texas Snakes, Alan Tennant writes that although these snakes look similar, “unlike any water snake, the cottonmouth has a triangular, slab-sided head.” [p.111]

According to Herps of Texas, Yellow-bellied Water Snakes and Blotched Water Snakes are two subspecies of Plain-bellied Water Snake.  Alan Tennant says their juveniles are indistinguishable, so that is helpful information about this juvenile snake I found here in November of 2015 — apparently it could be either species. (And also, the terms Water Snake and Watersnake are both used by these authorities.)

I am glad to have finally gotten good evidence of these species.

15 thoughts on “Finally Caught on Camera”