Nothing makes me happier than these wide-open spaces.

We are on the edge of Texas, looking through the Window of the Chisos Mountains into the mountains of Mexico.

This is the Pinnacles Trail up to the South Rim of the Chisos. 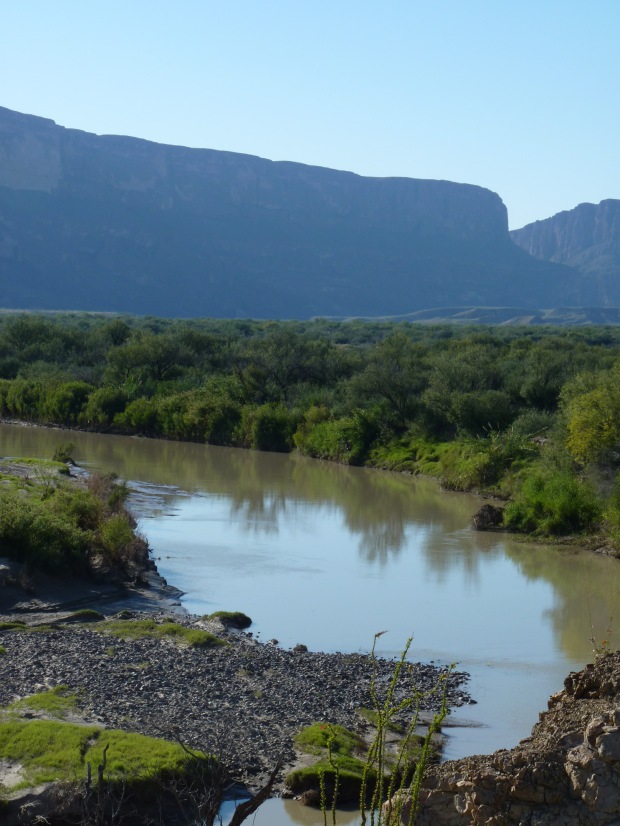 This is the Rio Grande, the river that is the border between Texas (on the right bank) and Mexico (on the left bank).

Along the Rio Grande, looking into Mexico.

The first four pictures show Big Bend National Park, and the last is on the road in Big Bend Ranch State Park in Texas.  I have been going out there every chance I get since 1982, and I even got to live out there as a seasonal park ranger for 8 weeks in the summers of 2006 and 2008.

The National Park is over 1250 square miles (3243 square kilometers), or as we like to point out, bigger than the state of Rhode Island.  In the summer, there might be only about 1000 people in the whole place.  The State Park is about a third of that, about 420 square miles (1090 square kilometers), and only about 3000 people visit it during the year.

I love these parks not only because they are sparsely populated, but because they have such a diversity of rock formations, plants, and animals.  I have seen bobcats, wild horses, gray foxes, zone-tailed hawks, Mexican jays, and even a black bear there.

← What’s So Interesting Over There?
Two Changes for You, One for Me →