Imagine that you and I are naturalists from different regions in the early 1800s, communicating about our findings, and that I come across a new butterfly. Maybe I would include a sketch in my letter, but how I would describe its coloring to you?

Probably I would refer to a color we both knew — I could write “it has spots the color of a lilac blossom, with a silver-gray dusting.”  We would both wish for a logical system to help us pinpoint color names quickly.

— we could have just turned to the purple section.  I would have chosen Number 43, Red Lilac Purple, to describe the spots on this butterfly.

Descriptions of some purple hues from 1821 book.

In this book with the glorious title of

Werner’s nomenclature of colours : with additions, arranged so as to render it highly useful to the arts and sciences, particularly zoology, botany, chemistry, mineralogy, and morbid anatomy : annexed to which are examples selected from well-known objects in the animal, vegetable, and mineral kingdoms

Scottish painter James Syme, adapted a color theory from a German book that was almost 50 years old in his time.  He arranged and annotated the information, and provided little paint samples to illustrate the colors.

What makes this book my favorite of all the old color theory books, are the descriptive phrases Syme used to accompany each color sample.  He chose very specific examples from the animal, vegetable, and mineral worlds.  I like to arrange them into found poetry, celebrating both the sublime:

(I stayed with Syme’s spelling and capitalization.)

Nicholas Rougeux has created a beautiful website of this book, with large displays of the pages that are easy to scroll through.

As much as I love Syme’s book, I had to find the earlier book that he used as his source.  That book, published in 1774, rejoiced in the title Von den äusserlichen Kennzeichen der Fossilien (pretty concise compared to Syme’s title). The author was Abraham Gottlob Werner, a German geologist. His color nomenclature was part of his system of describing and classifying minerals.

Here is his paragraph on “himmelblau” or sky blue (which, by the way, did not make it into Syme’s version): 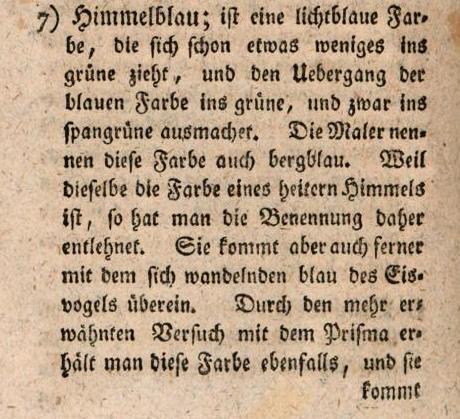 It looks to me like the section on color starts about page 95.

Sky blue is a light blue color that is a little drawn into the green, and the transition from the blue color into the green, namely into the chip green. The painters also call this color mountain blue. Because it is the color of a bright sky, the name has therefore been borrowed. But it also coincides with the kingfisher’s swirling blue.

(Translated by Google, with some help from me — my high school German allowed me to figure out words that Google’s OCR couldn’t read.  If only I had looked at this version at Heidelberg University, I could have picked the OCR tab to read it all in a modern font.)

The book was translated into English in 1805 and is available here on Google Books.  (The English translation left out the lovely sentence about the kingfisher, and also calls “chip green”, verdigris green instead.)

I look forward to reading all the color information in English!

I think my favorite phrase from Syme’s book is “the streak from the eye of the kingfisher.”  I love that he noticed such tiny details, and that he trusted that his readers would notice them too!